How your baby's growing: 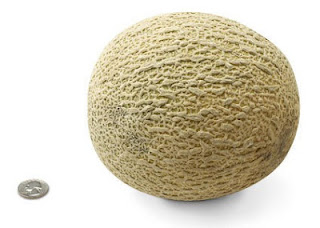 Your baby now weighs about 4 3/4 pounds (like your average cantaloupe) and is almost 18 inches long. His fat layers — which will help regulate his body temperature once he's born — are filling him out, making him rounder. His skin is also smoother than ever. His central nervous system is maturing and his lungs are continuing to mature as well. If you've been nervous about preterm labor, you'll be happy to know that babies born between 34 and 37 weeks who have no other health problems generally do fine. They may need a short stay in the neonatal nursery and may have a few short-term health issues, but in the long run, they usually do as well as full-term babies.

Stats:
How far along: 34 weeks
Sleep: I will have one good night of sleep and then a couple nights of no sleep.  I think my body is preparing me for those long sleepless nights I am about to be in store for.
Maternity Clothes:  Seriously?!?  The only things I can wear that aren't maternity are pajama pants.
Food Cravings:  Sweets, any and all.  Cheese Dip. I need to stay away from both.  I wish I was craving veggies and healthy stuff.  I did turn down some king cake today; that's a start :)
Food aversions: Red Meat, this just isn't going away.
Symptoms I have: Getting tired easily now.  If I am doing too much then I will start to have some tightening in my stomach.  I just have to do a little at a time instead of trying to do it all at once. Also, woke up this morning with some swelling in my feet.  Called the doctor's office and they say it's pretty normal based on where I am in my pregnancy.  I just have to keep an eye on it but they look like sausages.  LOL
Doctor's Appointment:  Every week now.  Next one is Thursday, Feb. 23.  I get ultrasounds every week also but this weeks weren't that good. He was facing my back so it was difficult to get a good look at him.
Movement:  ALL THE TIME!!!  People can stare at my stomach and see him moving.  He likes to get in the most awkward places too.  Not always the most comfortable for me but I will deal so he is as comfortable as he can get.  I can only imagine how limited his space is getting now.
Belly Button:  Here's hoping it stays and innie but I am losing hope day by day.  I don't actually think it will pop out but there is a good chance it will be flat by the end.
What Else?:  Had an amazing baby shower last week with some amazing friends.  I will post some pictures as soon as I get copies.

I decided last minute on Valentine's Day that I wanted Hibachi for dinner; BEST DECISION EVER!!!  It was fabulous.  We went to Okinawa in Ft. Walton which has fabulous hibachi.  It was the first time I have literally eaten everything given to me.  Normally I have a lot left over and get a take home box; not this time!!!  Brandon loves him some hibachi.


I know I am slacking on the nursery update but I am waiting on Nick to finish some painting and I want to get some of the pictures hung before posting.  Hopefully,  I will have something soon.

Posted by Rachell Chauvin at 10:21 AM