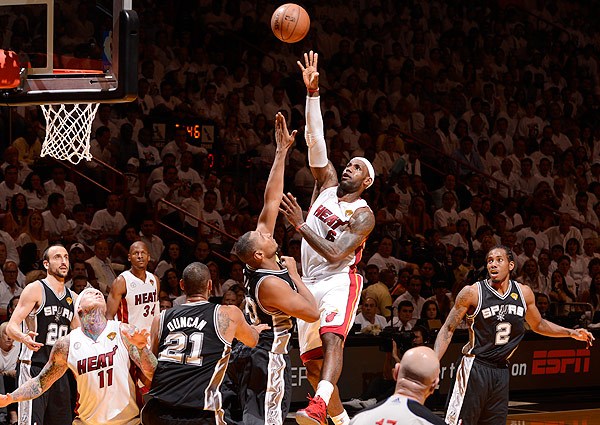 Happy official first day of Summer. Really, it's been Summer here since May but if you don't live in a tropical climate then congrats on making it to Summer finally. I guess it's only fitting then that the Miami Heat won the NBA Championship last night in another 4th quarter, final minute showstopper. That makes ring number two for King James.

He has now won 2 national titles, 2 League MVP and 2 Finals MVP awards, AND an Olympic gold medal all within about 12 month period. I would say he is on top of the world. Plus, he is finally marrying his baby mama come this fall.  Man is on a mission.

Now, people have already started the, "Is he better than Jordan talk." Don't get me wrong, LeBron is a straight up baller but MJ changed the game. The reason LeBron can play the style he plays today is because of Jordan. Anyone that changes the game that much can never be topped in my opinion.

Now, I live in Florida but I wouldn't say I am a huge Heat fan by any means. Really, I am/was a Dallas Mavericks fan because I really liked Jason Kidd but now he is going to coach the Brooklyn Nets and I won't be a fan of them anytime soon so I am currently in limbo.

I don't want to just jump on the bandwagon that the Miami Heat fandom right now so instead I will just congratulate from afar and just hope for another great finals series next year.

What better way to celebrate summer then with a new "Summertime" Jam.

Posted by Rachell Chauvin at 11:39 AM