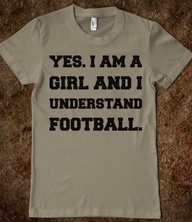 They say to be an expert in something that you have to have practiced it at least 10,000 hours. That is equal to over 416 days of practice on something. I don't think I have become an expert at anything based on those calculations BUT I do know there are plenty of things that I know a lot about. Like....Football.

Yes, I am a girl who LOVES football. My favorite season is Fall because of football. I live in the South so its like a religion here. I grew up watching it with my parents and parent's friends and love everything about it. Now, most women could care less about the actual game or how its played. But, if you really want to impress, or surprise, your man who does love football then just remember a few of these little gems. Who knows, you may end up knowing more that he does. haha

Total number of players on a team: 53 for NFL
Total number of players on the field at one time: 22 (11 from each team)
Size of the field: 120 yards (100 yards is the field of play and 10 years on each end are the end zone)
Points for a Touchdown: 6
Points for a Field Goal: 3
Safety Points: 2
Extra Point Kick: 1
Offensive Players: Quarterback  Running Back/Tail Back, Wide Receiver  Offensive Linemen (includes the Guards, Tackles and Center), Tight End, Full Back
Defensive Players: Defensive Linemen (ends, tackles), Linebackers, Safety's, Cornerbacks
Special Teams: Placekicker, Punters, Long snapper, Holder
Length of Game: 60 minutes (Four 15 minute quarters) 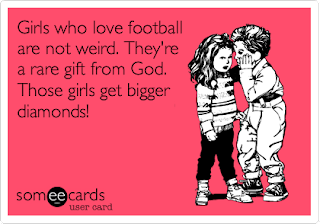 OK, so point of the game. Well, to score the most points to win obviously. How do they do it. Well, the easiest explanation is the offense drives the ball down the field by either running it or passing it. Each offense has 4 downs to go 10 yards.  If they succeed then they get a new set of downs. If not, the the ball is turned over to the other team. Each offense can score by either advancing the football to the end zone for a touchdown or by kicking a field goal. The defense can actually score points as well by forcing a turnover and advancing the football into the offense's end zone or by tackling whomever has the ball in the offense's end zone resulting in a safety.

So, if you are looking to impress that man of your's during his football season then just remember some of this information and he will look at you with awe. Heck, you might even enjoy watching the game with him which, let's be honest, is every male football fan's dream. A woman with knowledge of the sport he loves.

Posted by Rachell Chauvin at 9:13 AM