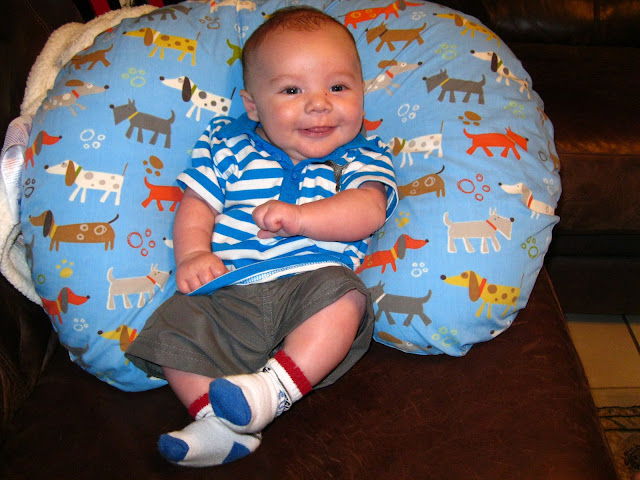 I cannot believe my little man is already 2 months old.  How time flies!!!  He had his 2 month check up yesterday and he had grown considerably.  He is now 13 pounds, 14 ounces (holy cow) and 23.5 inches long. He is in the 95 percentile for weight and 75 percentile for height.  Not sure where he is getting this tall gene from but I hope he keeps it.

Brandon had to get his first set of shots yesterday and man was he not happy.  3 shots and a drink of something later he shed his first tear EVER!!!  I can honestly say that you never want to see your little one scream and cry like that; it is absolutely heartbreaking.  It is also heartbreaking to see him have his first bout of sniffles.  He is just having a rough couple of days here.  Hopefully this will all clear up soon.

Brandon is a pretty good sleeper at night.  We have a pretty good nighttime routine which I think helps.  He usually gets a bath around 7:30pm and then gets in him jammies.  He will then lay on his boppy and get a bottle which usually ends with him falling asleep while eating it.  I will usually leave him on the boppy for about 15-20 minutes to make sure he is asleep before moving him to his crib for the night.  We keep his room pretty dark with only a small light on so when he wakes up in the night I can see him without turning on any big lights. 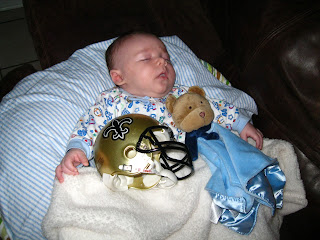 We don't turn on any music or anything to get him to sleep.  I don't want to start a habit that will be hard to break when he gets older.  If he is really fussy and just will not go down by 9 then I will usually sit in his room with him and rock him in the recliner for a few minutes before laying him back down.  I don't rock him to sleep since that is definitely not a habit to start but just enough to relax him. 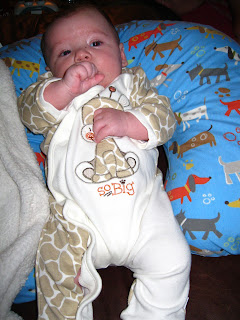 We can usually get about 6 hours of straight sleep before he gets up to eat.  He usually goes down between 8-9pm and then will wake up about 2:30-3am to eat and get a clean diaper.  He will then usually sleep until about 5:30am and he will eat again.  I will usually put him in his swing after this feeding so he will maybe sleep another hour or so after that.  We are usually up for the day between 6:30-7:30am.

Well, Brandon is definitely an eater.  He eats between 30-35 ounces of formula a day.  It is actually really funny to watch him when he first gets the bottle because he will lift his head up as soon as he sees it and opens his mouth really wide.  It's so cute.  Other than at night, he usually eat every 2.5 to 3 hours and about 4-5 oz. at each feeding. 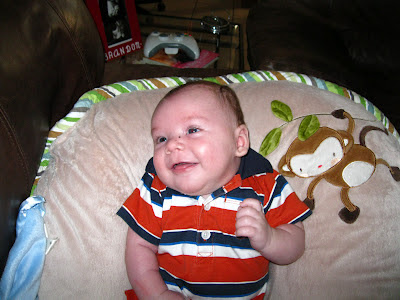 Brandon has really started vocalizing.  He has definite coo's and agou's when you are looking and talking to him.  You can really see him working hard to get the sounds out that he wants. 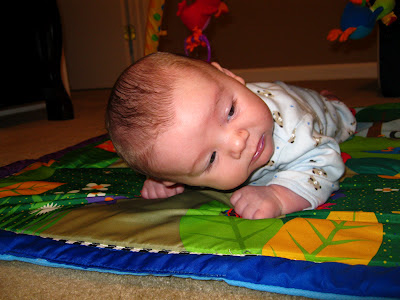 Brandon has really started to love his bouncer.  He will kick his feet to make it bounce and will swat at the birds that hang down.  His bouncer also vibrates and lights up and plays music.  I set it up so that to get it to light up and play music he has to play with the birds so he works on holding on to things and grabbing at stuff.

Tummy time has turned into fun also.  For a while he absolutely hated tummy time but now he is liking it.  I usually lay down in front of him so when he lifts his head he can see me.

He hasn't tried to roll over yet; not sure if he really cares about that.  If he is laying on his back he will roll from side to side but not all the way over.

Brandon loves to be sitting up; be it on the Boppy, in the Bumbo or in my lap.  He has to be facing out so he can see what all is going on.  He follows everything with his eyes.  Even yesterday, he was watching the doctor make bubbles with the soap.  Dr. Rigby said that is the youngest baby he has seen that would follow the bubbles.  I was quite proud. LOL

I cannot wait to see how much more he changes in the coming months.  He goes back to the doctor in 2 months for his 4 month check up.  I cannot imagine how big he will be then.  It is so much fun to watch him change and grow everyday.  Even with the lack of sleep and challenging times, I couldn't imagine my life any other way and I wouldn't change any of this for the world. 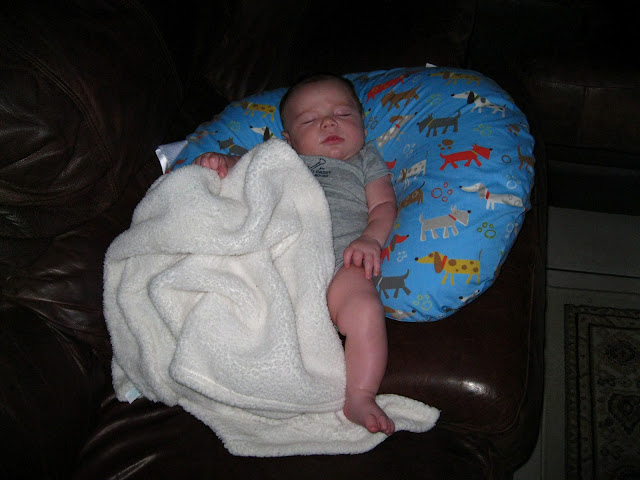 Posted by Rachell Chauvin at 10:34 AM