How Your Baby's Growing: 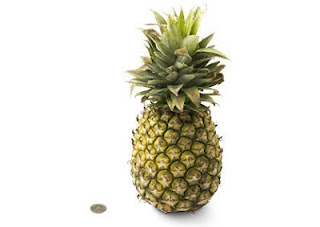 This week your baby weighs a little over 4 pounds (heft a pineapple) and has passed the 17-inch mark. He's rapidly losing that wrinkled, alien look and his skeleton is hardening. The bones in his skull aren't fused together, which allows them to move and slightly overlap, thus making it easier for him to fit through the birth canal. (The pressure on the head during birth is so intense that many babies are born with a conehead-like appearance.) These bones don't entirely fuse until early adulthood, so they can grow as his brain and other tissue expands during infancy and childhood.

Stats:
How far along: 33 weeks
Sleep:  I have been able to sleep pretty good.  I still get up a lot to pee.  The only issues I have are when Brandon is kicking me or I start getting some Braxton Hicks contractions going on.  I usually end up taking a shower and they go away and I can get back to sleep pretty quickly afterwards.
Maternity Clothes:  Yes!
Food Cravings:  The really cheap Totino's pizzas.  I could eat one every day.   And Homemade Taco Salad's.
Food aversions: Still red meat.
Symptoms I have: Braxton Hicks every now and then.  I get winded more easily now if I am doing too much.  Also I have some swelling in my hands and feet as the day goes on.
Doctor's Appointment:  TODAY!!!  I will have an ultrasound so I will post new pics tomorrow.
Movement:  He is a busy body.  Likes to push against my tummy and I swear he is doing somersaults in there.

Belly Button:  Still an innie; but barely.  Thing is holding on for dear life!!!

What else?:  Have a baby shower this Sunday that I am really looking forward too.

I have decided that we are no longer going to the Birthing Class.  There were only 2 classes left and neither of us felt like we got anything out of the first 4 and I have plenty of other things I can be doing for 2.5 hours on a Wednesday night.  If I had to do it over again, I would not have signed up for the class.  To me it was a total waste.

We Nick is in the process of putting together the dresser for Brandon's room so the room is a TOTAL DISASTER right now.  Hopefully, I will have some nursery pictures for next week.  For now, below is the current state of the room. 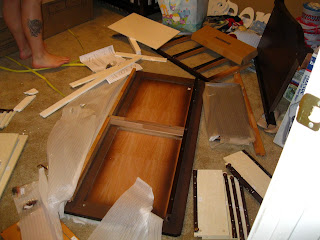 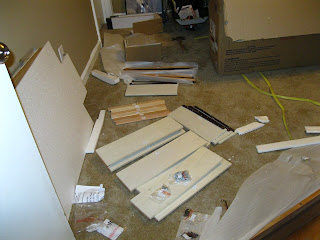 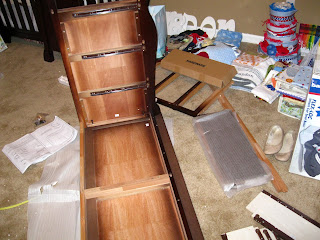 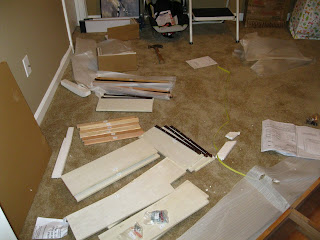 Posted by Rachell Chauvin at 12:18 PM